It was 8:20 AM on a Saturday when I opened up my wardrobe.

I had to go to the gym for a group training session with some teammates. But truth be told, I didn’t want to go.

It had been a big week.

My bedroom was warm and toasty, and it was freezing outside.

“Would they even miss me if I didn’t go? Everyone skips a session now and then, don’t they?”

All of these thoughts ran through my head as I put on my clothes, went outside, and waited for the car to warm up. Then I pressed play on my “Get pumped” playlist, and a switch flipped in my head.

I’ve done this before.

I can do this.

That right there? ☝️ That’s the power of anchoring.

Here’s the thing: Everyone has anchors. Seemingly insignificant aspects of daily life trigger an emotion, whether it’s a certain song that suddenly takes you back to high school or that jacket that makes you feel like you can do anything.

And yet, few of us actually stop to think about what our anchors are.

What’s more, when you use anchors deliberately, they can become a valuable tool to help you build habits, perform better, and reach your goals.

I first discovered anchoring when I was fresh out of college, and I’m not kidding: It. Changed. My. Life. And if you can master this simple concept, I promise you that it will change yours, too—in some way, shape, or form.

So, what is anchoring?

Anchoring happens when an action or event acts as a stimulus to generate a response.

If you’ve ever heard about Pavlov’s Dogs, that’s a classic example of how anchoring can condition us to respond a certain way to scenarios. Every time Pavlov fed the dogs, he rang a metronome. Gradually, he found that the dogs would begin to salivate as soon as they heard the metronome because they had associated that sound with food.

Jim also uses this in The Office to make Dwight want an Altoid every time he reboots his computer:

We all have anchors, positive and negative. You might smell fresh-cooked pasta and instantly feel a sense of calm because it takes you back to your childhood. Or you might get anxious every time you hear the phone ring because it reminds you of an unpleasant call that you had at an earlier point in your life.

But when you proactively start to use anchors, they get really, really powerful.

Think about Tiger Woods with his iconic red polo shirt during golf tournaments. Or Rafael Nadal’s pre-serve ritual that he did 146 times in his match against Denis Shapovalov:

Both of these athletes have an anchor that helps them get into the right frame of mind for success.

And with a little help, you can too.

The benefits of anchoring 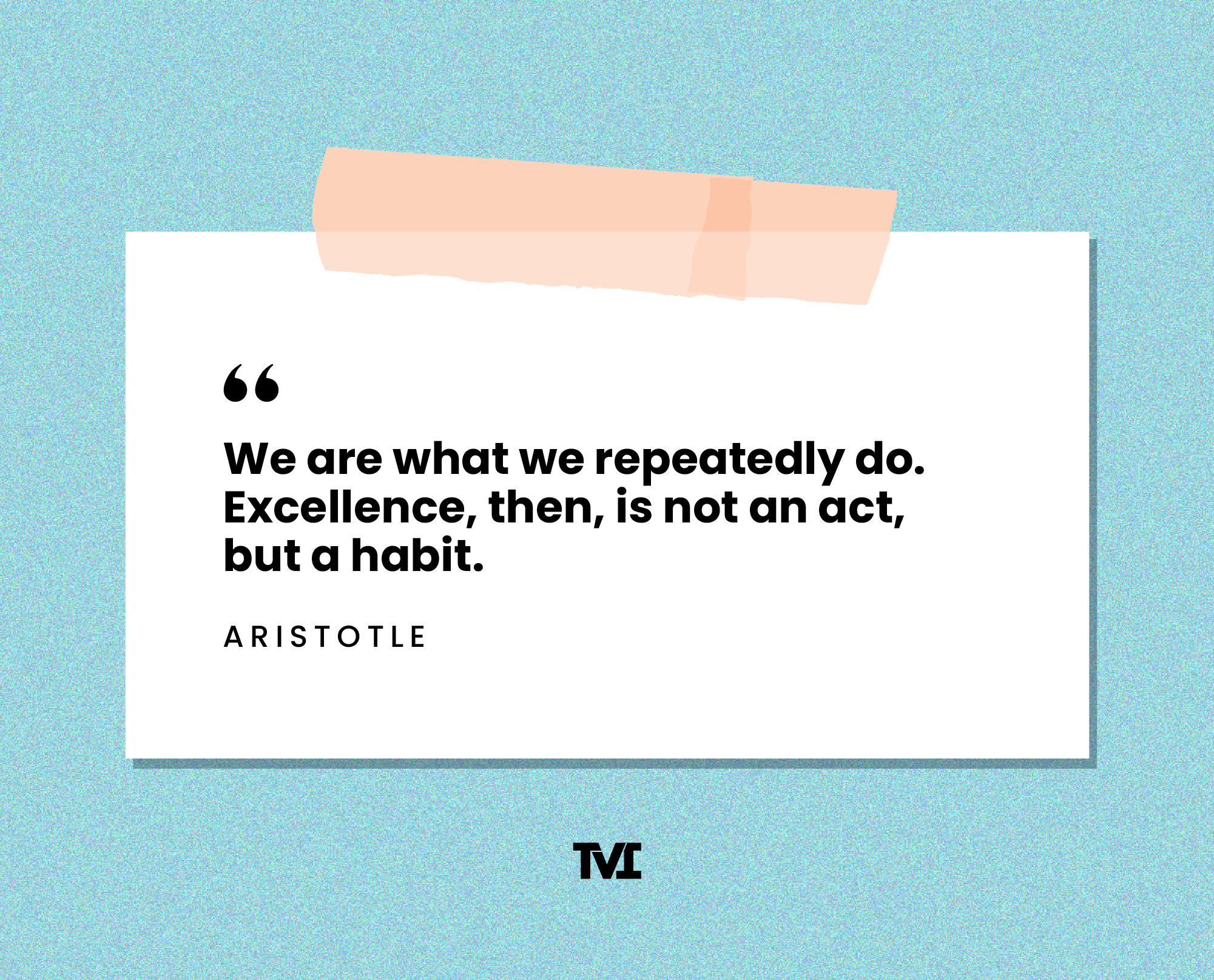 One of the reasons I love anchoring so much is because it’s beneficial in so many scenarios.

It’s a good method to stay consistent when you’re trying to build habits because let’s face it: it’s nearly impossible to succeed on pure willpower alone.

It doesn’t matter who you are or what you do. At some point, your motivation tank will run dry, and you’ll need a little top-up to keep you going. With an anchor, you have something to come back to over and over again, using it to form habits and shift your mindset.

I’ve seen this a lot with people when they had to work from home during the pandemic.

When you’re going at it alone without a commute to the office or colleagues to keep you accountable, it’s easy to descend into playing video games instead of ACTUALLY doing work. To counteract this natural desire to procrastinate, one of my friends started using clothing as an anchor to put herself into “work” mode every day.

Even though she wasn’t going to the office, she’d get ready in the morning just like she was. This helped her stick to her routine and be productive while working from home.

Her situation hadn’t changed, but her mindset had.

Because her brain already had associations of certain outfits with work, it made it a lot easier for her to switch to thinking about business, even though she wasn’t in a business environment.

Anchoring is also an incredibly useful tool for shifting your mood, especially if you’re dealing with negative emotions.

You know that feeling you get when you feel anxious? The whole world feels like it’s imploding, and you feel powerless to stop it—like you’re in the middle of the ocean on a stormy night.

In this instance, anchoring literally acts as a mental anchor to keep your emotions stable and in check.

When I feel the anxiety bubbling up, I like to use sandalwood incense. Every time I smell it, I’m immediately transported back to Kyoto, traversing through temples in the fall, without a care in the world. Before I know it, I’m calm, my heart rate has slowed, and the anxiety has subsided—all because of that one familiar smell.

Breaking down the five different types of anchors

In case you haven’t gathered already, anchors can literally be anything. They can be a certain outfit, a song, or even a mantra that you repeat to yourself.

Different anchors work for different people, depending on which senses evoke the strongest response in you or what’s most suitable for your individual situation.

For example, it wouldn’t make sense to use an incense smell as an anchor for work-related stresses (unless you’re a baller and you have your own office). You want something accessible to you at all times, and that isn’t too conspicuous, like a picture on your desk or a song you can play on your phone.

If you want to get the most out of anchoring, you need to start at the basics: understanding what types of anchors to use and when.

Visual anchors use sight to trigger a certain mental state. These can either be external objects or images that you look at, like a photo, an object, or an outfit. Or, an internal anchor that you visualize in your mind, such as a place you used to visit as a child.

Internal anchors are more common because of how readily accessible they are. However, while you don’t need to have an overactive imagination, these anchors do need to feel as real as possible, because you want your brain to fully connect and experience the emotions that you would if you were there in real life.

I picked up a great external visual anchor when I was at a Yoko Ono exhibit years and years ago. There was a jar filled with puzzle pieces from a jigsaw of the sky—the idea being that everyone who took one would be connected through these individual pieces. I carry that puzzle piece in my wallet, and every time I feel alone, I look at it, and it gives me that sense of connectedness that I felt at the exhibition.

The olfactory system refers to the structures that give us our sense of smell. And given that smell is the strongest human sense, it’s no surprise that scents are really effective at anchoring us to a certain mood or feeling.

In fact, it’s so effective that the legendary Wolf of Wall Street himself, Jordan Belfort, used olfactory anchoring to manage his mental state.

When he closed a deal and was feeling on top of the world, Belfort would sniff a scented nasal inhaler. Then the next time before a big meeting, he’d use the same nasal inhaler to bring his mindset back to that state of confidence. 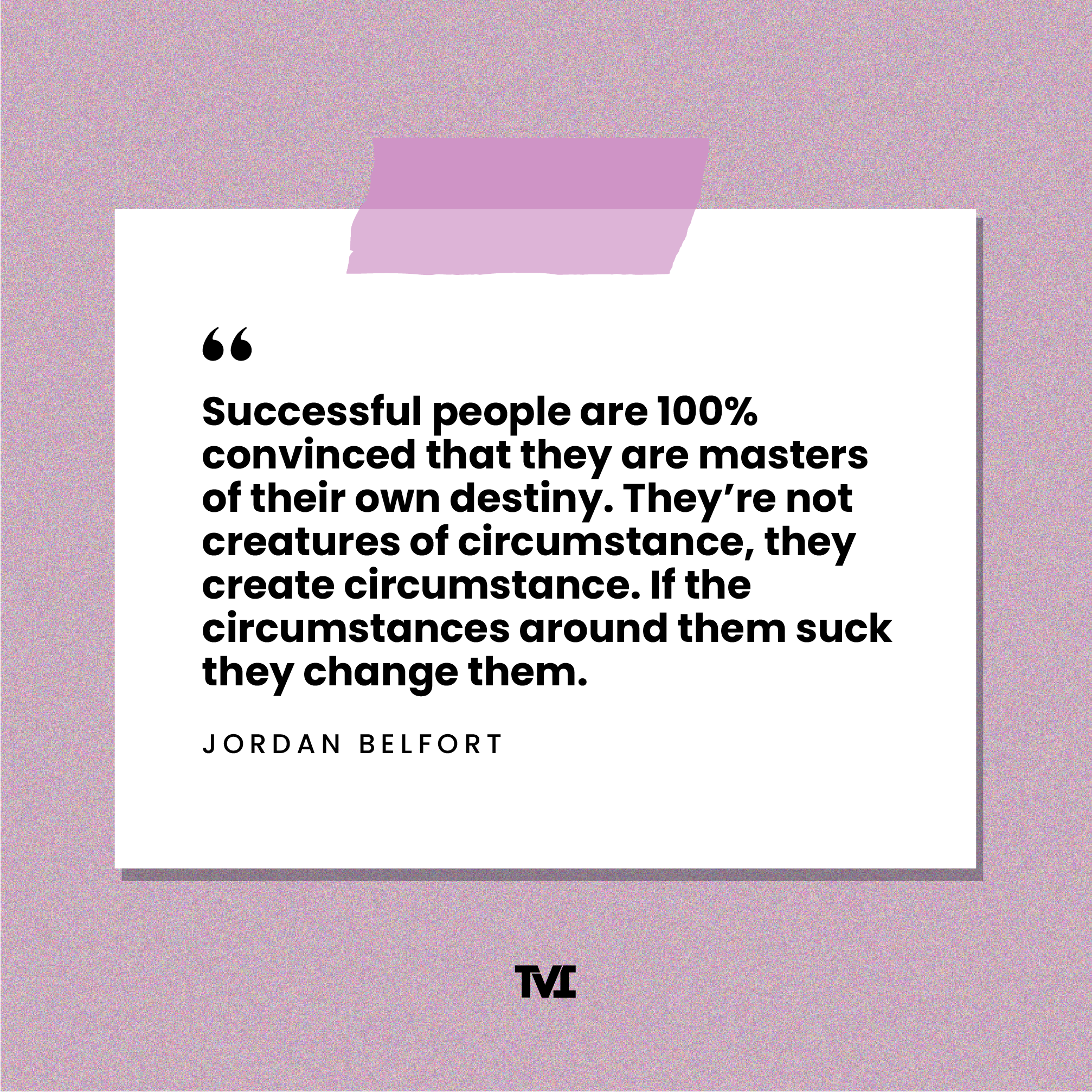 Kinesthetic anchors use touch or movement to evoke a specific mental state. These might be anything from making a fist with your hand, to touching your wrist, to putting your hands on your thighs, or striking a power pose in the bathroom.

Kinesthetic anchors are among the easiest to implement because you can do them anywhere at any time. You can also combine touch or movement with another anchor, like Tony Robbins’ infamous “swish change”:

One of my favorites, the auditory anchor, uses sound to pull us back to a certain state of mind. Mantras are probably the most common amongst auditory anchors, whether it’s chanted internally or exclaimed loudly like Frank Costanza:

Other auditory anchors could involve making a noise, like whistling or listening to a song or poem on your phone.

As you’ve probably guessed, gustatory anchors involve the fifth sense: taste. This one is the least accessible of the five, but it’s still possible to use taste to put yourself in a specific mental state.

I know multiple people who like to chew gum before working out. Even though they clearly don’t need to freshen their breath to train, the act of chewing the gum is like starting the engine in the car: once they pop a piece into their mouth, they’re ready to get moving.

How to use anchors in your daily life

Once you know the five different types of anchors, it’s time to start deliberately creating your very own anchors to use in day-to-day life. Thankfully, the process of creating anchors is fairly straightforward—it just takes mindfulness and consistency.

Eventually, you’ll start to create an association between that sound and the feeling of confidence. As this happens, you can start tapping into your anchor to put yourself back into that state when you need a little boost.

Set yourself up for success with anchoring

Just remember that anchoring works differently for everyone.

The most effective and accessible anchors for me may not be the same for the person next to me, so it’s a good idea to experiment and see what resonates with you.

The last thing I’ll say is this: Anchors have been incredibly helpful to me over the years. They’ve helped me keep calm in tough times, build habits when I didn’t have the motivation, and achieve my goals.

And if you use them wisely, I know they’ll help you too.