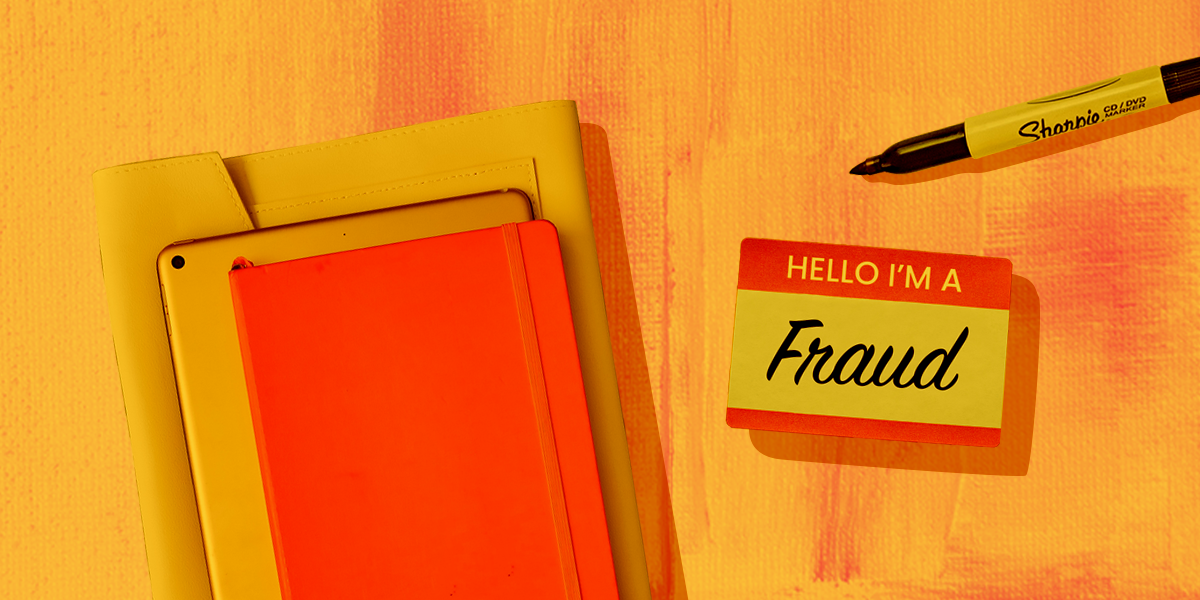 Imposter Syndrome: Is “Fake It Til You Make It” Really the Best Approach?

I had just made the biggest move of my career and life, dropping everything to relocate from Sydney, Australia, to Shanghai, China. I was transferred by my company and tasked with building a marketing team from scratch. This team would help drive sales for almost half of the country’s business. *Gulp*

In my first month, I was invited to have lunch with travel agency CEOs. My own CEO told me that he believed I would influence the office of 150, thanks to my experience working in another country and my Chinese heritage.

I went on business trips to regional offices and had to create a marketing plan and present it to a room of 60 people—all of whom were older than me.

The entire time, I heard this voice in my head.

“They’re going to figure out that you have no idea what you’re doing.”

I was suffering from the dreaded imposter syndrome. And I wasn’t alone.

Imposter syndrome affects almost all of us.

7 in 10 people have reported feeling imposter syndrome at some point in their lives. Even the most seemingly successful women out there have experienced it, including Tina Fey, Natalie Portman, and Sheryl Sandberg.

Whether it’s facing your fears, getting a promotion, or starting your own freelance business, imposter syndrome is always there, reeling its ugly head. But that doesn’t mean that you have to let it control you, “fake it til you make it,” or even let it affect the decisions you make.

You can face imposter syndrome head-on, just like I did.

And you absolutely CAN overcome it.

In this post, I’ll take you through the steps I used to conquer imposter syndrome and how I came out a stronger person.

Ah, the impostor syndrome!? The beauty of the impostor syndrome is you vacillate between extreme egomania and a complete feeling of: ‘I’m a fraud! Oh god, they’re on to me! I’m a fraud!’ So you just try to ride the egomania when it comes and enjoy it and then slide through the idea of fraud. Seriously, I’ve just realized that almost everyone is a fraud, so I try not to feel too bad about it.

What is imposter syndrome?

Imposter syndrome is a psychological phenomenon where a person doubts their abilities, skills, or accomplishments—so much so that they feel like they’re going to be exposed as a fraud or undeserving of their success. This feeling persists no matter how much evidence that person is given to the contrary that proves that they deserve to be in the position or situation that they’re in.

Some of the most common signs of imposter syndrome include:

Within the broader phenomenon of imposter syndrome, people find themselves coping in different ways. Some set crazy ambitious goals, then get disappointed when they don’t meet them. Others are too scared to ask for help because they’re worried that they’ll look like a phony or overwork themselves to compensate for their perceived inadequacies.

Imposter syndrome was first identified in 1978, although back then it was referred to as the “imposter phenomenon.” Researchers originally thought it occurred among high-achieving women. Today we know that it affects people of all genders, ages, and positions—from entry-level cadets to high-flying executives.

But why exactly do we get this feeling in the first place?

The sense of being an imposter or fraud doesn’t happen overnight. Like everything, it’s a symptom of a deeper root issue—like low self-esteem. This is one of the most common causes of imposter syndrome. If you don’t believe in yourself and you constantly doubt your abilities, you’re more likely to attribute your success to external factors and brush off your achievements as sheer dumb luck.

Anxiety is another highly potent ingredient for imposter syndrome. If you’re prone to feeling worried or fearful in everyday situations, you’re more likely to bring these emotions to your career as well. You might overthink your title and compare yourself to peers at the same level or playback presentations and scrutinize little slip-ups. This can make you feel inadequate or like you don’t belong.

Then there’s perfectionism (my old nemesis). When you’re a perfectionist, you generally believe there’s a “correct” way to behave or do things, and you’re constantly trying to chase that level of perfection. This leads to hours spent focusing on tiny details for fear of not meeting your own high standards or beating yourself up over mistakes and feeling like you’re constantly falling short of expectations.

The most prevalent cause of imposter syndrome, though, is simply a change or transition.

You might be moving into a brand new job or getting a big promotion at work, which means you’re jumping into uncharted territory. When we’re faced with new challenges or scenarios, our lack of experience and the pressure to succeed tends to form the perfect storm for imposter syndrome to thrive.

The ups and downs of dealing with imposter syndrome

Naturally, imposter syndrome opens the door to a world of other unpleasant feelings.

When a person has imposter syndrome, they often feel the need to overwork, overperform, and overdeliver to keep from getting found out. Unsurprisingly, this leads to burnout and exhaustion: a survey from Asana found that 42% of workers experienced imposter syndrome and burnout at the same time.

It can also be crippling. Imposter syndrome causes people to avoid taking on projects so they can’t publicly fail, or because they doubt their abilities to achieve what’s needed.

Because they think they’re living undercover as a fraud, most suffer in silence for fear of being found out.

Just Shrink Into The Bush.. GIFfrom The Simpsons GIFs

I felt this first-hand at my job in Shanghai. For the first year of working there, I got in at 8 a.m. and refused to go home before 7 p.m. I said yes to every single project. I’d spend hours and hours overanalyzing interactions with colleagues and external partners, worrying that they would think I wasn’t up to the “Senior Manager” title that I had. All of this, because I felt like I wasn’t supposed to be there—like my entire promotion had been a fluke.

Believe it or not, imposter syndrome doesn’t only come with downsides.

Research from MIT found that people who deal with imposter syndrome are rated as having stronger social skills such as empathy and interpersonal skills. This is because people with imposter-type feelings are more conscious of how their colleagues or clients perceive them, which leads them to focus more on how others feel.

Yet despite this surprising benefit of imposter syndrome, it definitely does more harm than good.

It’s absolutely possible to face your fears head-on and deal with those negative feelings. The first step is to acknowledge what’s happening and actively want to change the belief that you’re not good enough.

Once you do, there are a few steps you can take to turn the endless questions of “why me?” into “why not me?”

Don’t bottle it up!

Your first instinct when you feel like an imposter is probably to keep it to yourself and hide in the shadows for fear of being found out.

In actual fact, this is one of the worst things you can do.

Beliefs tend to fester when you don’t talk about them. Think about it—if the only person you’re talking to about your imposter syndrome is yourself, then the conversation goes something like this:

You: You don’t belong here.

Also you: I know! All of my colleagues are secretly talking about how incompetent I am. Did you notice how nobody said anything after my last presentation?

You: Yeah, it’s because you clearly didn’t know what you were talking about. Your manager only hired you because they couldn’t find anyone better.

That’s pretty toxic, right? And yet, if one of your friends came up to you and said that, they would officially be the worst friend ever.

Break the vicious circle and confide in a good friend, a mentor, or a loved one. They’ll be able to provide you with some much-needed perspective on the situation, and it also takes a lot of the weight off your shoulders. More often than not, they’ll come back with something like “I thought I was the only one!”—helping you to realize that you’re not alone.

If you’re not comfortable speaking to someone you know, consider speaking to a therapist or psychologist. As a third party, these trained professionals offer an objective view of the situation and can even provide you with tools to better navigate imposter syndrome in the future.

I know—you feel like you’re a fraud, so you must be, right?

But what if you challenged this thought instead of taking it as the absolute truth?

The next time those dreaded feelings of imposter syndrome creep up, try to approach it rationally and come up with a counter-argument to every negative thought.

Think you’ve tricked all of your colleagues and sooner or later they’re going to find out you’re an imposter? Let’s get real: fooling everyone would be pretty hard and fairly unlikely, especially if you still have your job.

Believe that you’re not qualified enough for that prestigious college? Remember: colleges receive thousands of applications every semester and scrutinize them all in detail. If they didn’t think you had what it takes, you wouldn’t have made the cut.

As you start to question your own beliefs about being an imposter and look for evidence to the contrary, you’ll quickly begin to realize that many of your assumptions simply aren’t true. Do this enough, and these feelings will carry a lot less weight in the future.

Even the strongest of trees won’t survive without a deep network of roots. When you’re feeling alone, it helps to have people that you can count on.

Forge a network of coworkers, classmates, and friends who support you and who you trust to tell you the truth. These people will provide a much-needed fresh perspective on your situation and can offer guidance to you if you’re feeling alone. It’s also a good opportunity for you to provide the same type of support to people you care about, so everyone can overcome their challenges together.

Comparison is the thief of joy.

Look on any social media platform, and you’ll find people who are doing more, achieving more, and being more. The same goes for the office or the classroom: when you search for it, you’ll always find someone who does something better than you.

The thing is, if you’re constantly comparing yourself to others, you’re going to always focus on your flaws—rather than the stuff you’re actually good at. You’re also not getting the whole story. For example, that colleague who just landed a promotion may have been passed over for multiple jobs beforehand, or that friend who started their own business might have sacrificed a lot of other things to reach that milestone.

Rather than always comparing yourself to others, hone in on what you’re good at. Everyone has their own abilities, strengths, and flaws. It’s about recognizing these in yourself and focusing on what’s important to you.

Don’t let it hold you back

Imposter syndrome is only debilitating if you let it be. You know that saying, “feel the fear and do it anyway?” That’s 100% applicable here. The key is to pursue your goals in spite of how you feel, even if you feel like you don’t belong.

More importantly, be kind to yourself. You don’t have to be perfect to reach your goals, and nobody expects you to be. When you let go of the idea that you have to measure up to other people’s standards, you’ll thrive and perform at your best—whether at work, school, or in your personal life.