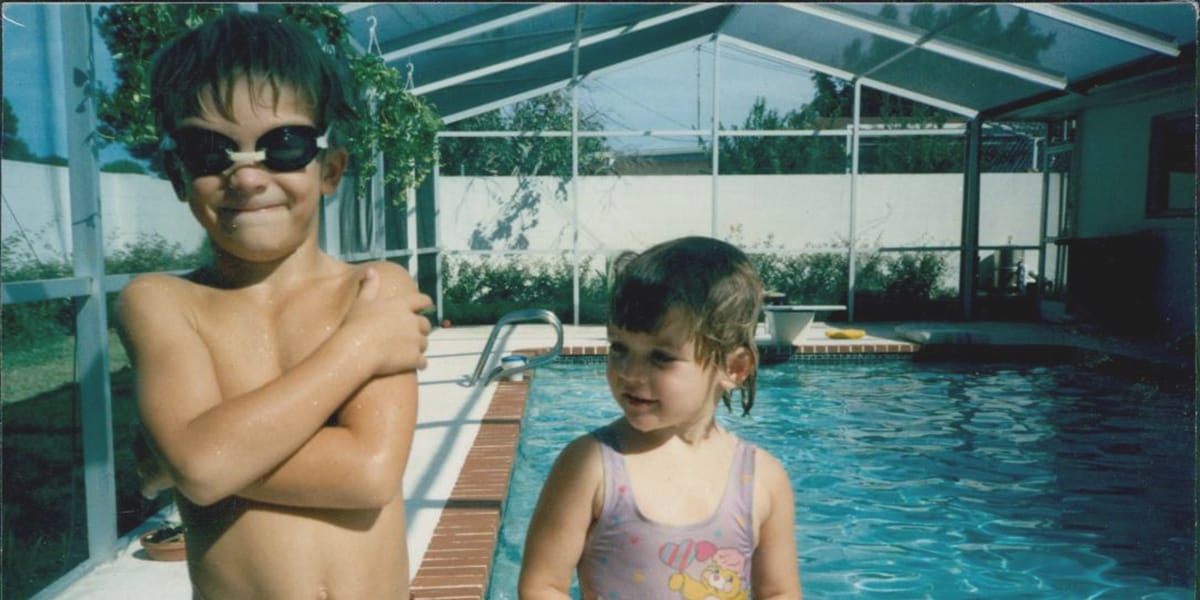 The Crucial Lessons Swimming Taught Me About Life

I was in the pool from the earliest age, and being a swimmer became a core part of my identity.

My father was a champion swimmer. My parents met on the high school swim team. I swam in college.

Within these experiences was a rollercoaster of change that fundamentally taught me who I am.

You wouldn’t think swimming down and back, over and over again, could offer much wisdom—but it was packed with insight.

Here are four lessons you can learn, without having to swim thousands of miles.

1. There is power in momentum

In college, fall training presented a stark comparison. Most of the women came in thin but mostly in-shape. Meanwhile, half the men had beer guts. They’d continued that infamous swimming diet without the swimming part. The ladies, meanwhile, had adopted healthy eating and slimmed-down, eager to drop their swimmer’s shoulders.

On day one, my co-swimmer David came in, looking half-pregnant. I busted his chops, “You’ve been a busy boy, haven’t you?”

He said, “Don’t be jealous cause I’m dead sexy,” in a thick Scottish accent while rubbing his belly.

Thirty minutes later, he was standing over the giant trash can, unleashing his breakfast. All humor had vacated his body as well.

Not to pat myself on the back, but I had no problems. I was buffeted by a 6 days-a-week summer training routine, which I’ve continued to this day.

My training was simple too. I did a 40-minute workout, with a concentrated central set (10x100s on the 1:30). I made a rule, “No weaseling out.” And stuck to it. I’ve found with exercise, swimming especially, you can’t just jump in a pool and hope a workout happens. Setting rules upfront frames your performance in most things.

I’ve applied this mentality to many aspects of my life: word count requirements, listing out goals, planning my diet.

It’s better to maintain structure and momentum than push a boulder forward from zero. This also brings a tailwind of benefits—knowing I have control of my life, keeping my weight down, being more productive and happy.

2. Marginal gains can create a chasm

If you’d watched Mark Spitz swimming his Olympic events, you wouldn’t have seen anything wrong.

He would have appeared to be soaring ahead in an effortless fashion.

But take a look at his stroke, juxtaposed to Phelps, 40 years apart: 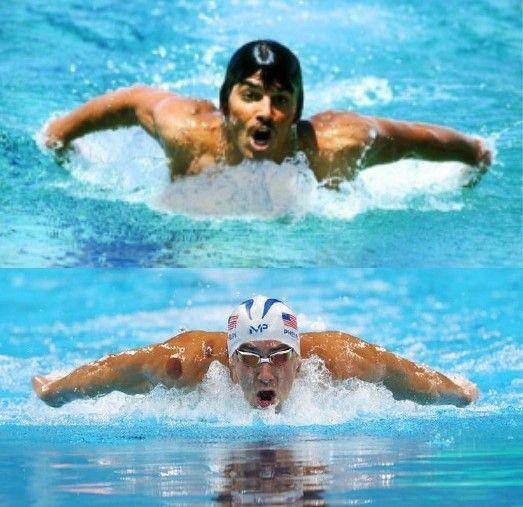 The difference is obvious. Spitz looks like he’s just jumped out of a boat too soon and is running to shore. Phelps looks like a stealth bomber.

There isn’t a single magic trick Phelps is doing. His stroke is the product of dozens of innovations in swimming, many of them revolving around improvements in hydrodynamics.

His hips are higher. His chin is just above the water. He bends his knees less when he kicks, to help keep his body horizontal. His body is congruent on both sides, versus Spitz, who is tilted to his left. The butterfly is the hardest stroke.

The result? In a sport where winners are separated by milliseconds, Phelps is a full 10 seconds faster than Spitz in this event. It’s a perfect example of how efficiencies compound. The little headaches and details we dread to fix, add up over time, producing a powerfully effective finished product.

Never underestimate the value of small improvements. They stack.

3. Hatred and love are separated by how you define a problem

Swimming is a rather horrible sport when it comes to training. It’s not unlike training for a Tour-De-France: constant hours and depletion.

I can remember sitting in class, feeling sleepier than I ever thought possible, my eyelids pulling down like weights were attached. It felt like I’d been kept up all night by a baby screaming, and also worked out too hard.

Why would anyone ever swim?

The truth: I hated swimming for years. I despised the pool with every morsel of my being, and even quit for a couple years in my early teens.

It wasn’t until I recognized I had a gift, and I needed goals, that things changed. I realized swimming could get me into college. I noticed it made me more attractive to women.

I fell in love with the purity of the sport. There is no team or complex rules to learn. Everything, your scholarship, the respect of your peers, is defined by a singular metric: your time.

Being able to swim a sub-21 second 50 free became my Olympus. I was in awe of those who did it. A small part of me hated them too, simply because they could do something I couldn’t. Yet that hatred became a motivating force, a healthy obsession I used to fuel my improvement.

Swimming taught me there has to be a “promised land” in anything we do. It can’t just be paychecks. We need big dreams and people we hold admiration for. Anything I’ve ever failed at has been anchored in a lack of destination. Peddling our wheels aimlessly, doing “just enough” only leads to heartache.

4. The true value of hardship

A taper is a magnificent thing. In the two weeks leading up to a championship, they dialed down our training to 70% of the normal yardage in week one. Then, 50% in week two.

In the weeks leading up to that taper, there was a level of fatigue that was persisting, like a disease, constantly wearing us down. But the coming championship and taper were what fueled us all through all of it.

After the taper, when the championship rolled around? You felt like a god in the water. Your body had been given this huge window to recover. You seemed to skip across the top of the water like a basilisk lizard.

You felt the water rushing past your face like you were being pulled by a boat. You’d swim faster than you ever thought. And after all was said and done, you never felt more satisfied.

This is the final and most important lesson of swimming: the payoff of the grind. Those who didn’t train hard got no benefit from the taper. They were still stuck in mediocrity. Their body hadn’t been broken down adequately to be built back up into something better. Consequently, they were plagued by guilt.

Those that trained appropriately, finally had their chance to set a new bar.

Taking a sled-dog approach, biting down on your mouthpiece, has always been my path to getting things done.

I got through my hardest swimming, by taking my mind off of the pain and thinking of the championship.

If you can minimize the negative aspects of goal-chasing, and relish and prolong the payoffs, you’ll be more likely to continue the chase.